The Plains of Mesopotamia

Leah: Nothing like arriving at 6:15 a.m. after an overnight bus to have what should have been a ten minute ride from the otogar, or bus station, turn into a three hour debacle. Having reached Sanliurfa, aka “Urfa”, in one piece we made our way—still groggy and half asleep—to the dolmus stands, where we assumed we’d be able to catch one of these minivans into the city center and find our hotel. Since no one spoke English and our Turkish only covers the mere basics, we showed a few gentlemen the name of our hotel, the address and the circled location on the map of Sanliurfa, which also included other reference points (written in Turkish!). Several people made a few hand motions that looked like airplanes and babbled at us in Turkish, but we could only stand there like mute fools and kept pointing to the address and location on a map. 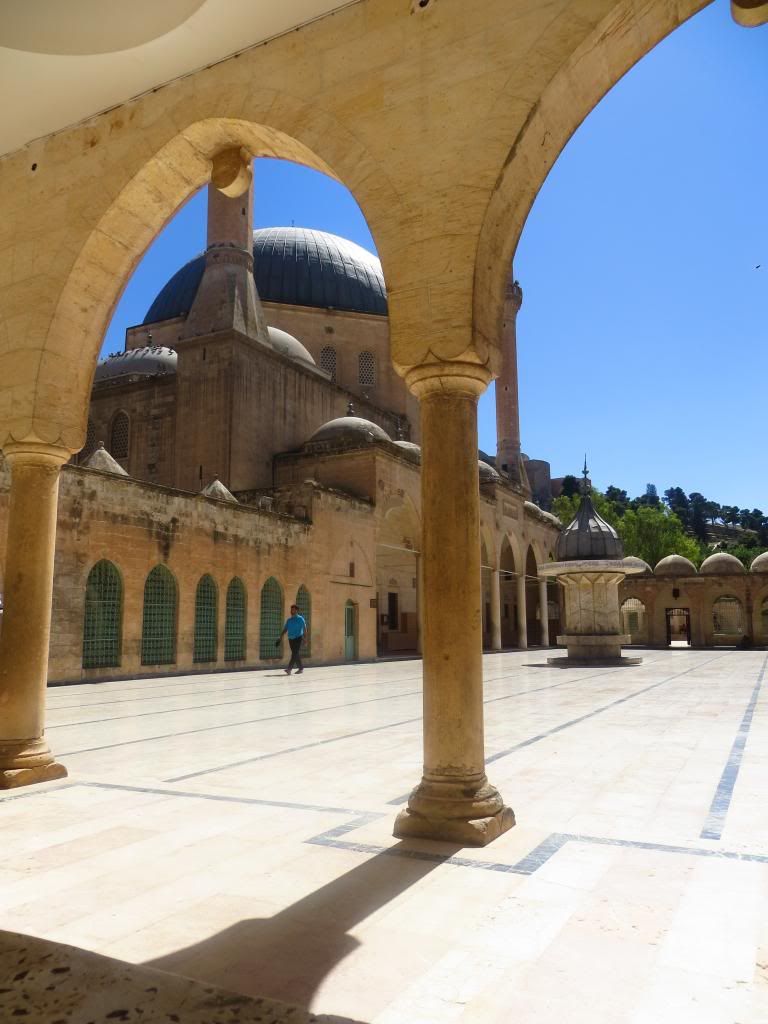 We were soon trundled off to a dolmus, where we waited for an hour while it filled with passengers before making our way out of the bus station. Our first premonition that something wasn’t right occurred when we turned away from the city center and then a bit later as we sped through parched and desolate desertscapes. Eventually the driver pulled off the road across from an airport about 30 minutes outside of town and beckoned that this was our stop. Except not. We kept trying to explain and were getting nowhere until an older male passenger whipped out his iPhone, called his son (who spoke English) and handed it off to Steve so they could all figure out exactly what it was that these crazy foreigners wanted.

Our situation explained, we were put on another dolmus heading back into town and dropped near a major road, where  we were escorted to our hotel doorstep by a lovely Turkish woman who spoke no English but made sure we were safely delivered. Quite the morning! In defense of the locals, we did inadvertently show up at the inter-village buses instead of finding the ones that ran throughout the city, but we also though that our gesticulations and map referencing clearly stated that we wanted to go into the city center. As Steve eloquently put it, that would be like someone arriving at the bus station in San Diego and pointing to downtown (just a few minutes away), only to be put on a bus and driven 30 minutes north to a random airport.

Once checked into the Otel Ugur we headed into the heart of Old Urfa, which holds a reputation among the Turks as being a focus for Islamic fundamentalism and is also a place of pilgrimage for many religions. Indeed, the prophet Job was purported to have lived here and not only was it here that Abraham supposedly received his summons from God to take his family to Canaan, but he was also born here and his birth cave is a reverential place of worship for Muslims who recognize him as a prophet. We also checked it out and though there isn’t much to see in the grotto, it’s easy to imagine what could have been all those centuries ago.  (Steve: It is also a site of pilgrimage for Christians and while I was in a room full of Muslim men, no one batted an eye when I did a sign of the cross.)

While noshing our kebabs we strolled among the pools teeming with sacred carp and watched children and adults alike hurl handfuls of food into the midst of gleaming, fishy whirlpools. The massive citadel overlooking the city also called to us, so we huffed up the side of the hill to reach it and spent some time in the shade of a few lone Corinthian columns taking in the views, counting the endless mosque minarets and imagining what this place looked like over the centuries as Arabs, Christians, Mongols and the Ottoman Empire each had a go at ruling. No visit would be complete without food, so we sipped delicious slushies as we explored the labyrinthine market stalls, found the best baklava in the city and even enjoyed an al fresco dinner where we pointed to what type of skewered meat we wanted and then it was cooked on hot coals in front of us and served with plenty of lavas bread (just like tortillas for my Mexican hubby!), roasted spicy peppers, tomatoes, grilled onions and salad fixins. Yum!

We even took a day trip to Harran, with its Syrian influenced beehive-style houses that stay cool during the grueling desert summers and warm in the chilly winters. It’s also considered to be one of the oldest settlements on earth, having been continuously inhabited for at least 6,000 years, although now it’s semi nomadic Arabs and a few Kurds who call Harran home. We poked around the beehive homes, took in the 11th century crusader fortress and even found a pair of ducklings with a chicken mother (egg mix-up perhaps?) It was also heartbreaking to realize that we were only about six miles from Syria-one of my favorite countries- but that obvious current events precluded us from crossing the border...

Our time in Sanliurfa well spent, we were ready to heed Jess’s advice and pay a visit to Hasankeyf, a spectacular ruined settlement on the banks of the Tigris River. The best part about our trip there? We had to pass through the city of Batman to do so. Although we didn’t see any caped crusaders we definitely had more than one chuckle reading the signs along the way. But on to Hasankeyf…The village has been under threat of destruction for years as the government debates constructing the Ilisu Hydroelectric Dam on the Tigris River that would drown the village, bridge and lower part of the historical site. Jess had urged us to check it out while it still exists and we’re so glad we did.

Although our lodging, the Hasankeyf Motel, seems balanced precipitously on the ledge of the Tigris, slopes downward and shudders every time a large truck crosses the bridge, the views of the river and surrounding historical sites can’t be beat. We sat nightly on our small terrace and watched the bats swoop in and out of the cave dwellings as the sun set over the Raman Mountains, illuminating the ruins that hugged the river.
Our daily forays through the sites took in crumbling old mosques, dervish lodges, cave dwellings (where local cows now shelter from the excruciating summer heat), mausoleums, ceramic ovens and more. We even ran into an archaeological team from a local university in Batman (not gonna lie, these guys were quite easy on the eyes); the lead researcher even spoke English and stopped to chat for a bit. He explained how the villagers live in constant fear that they’ll finally receive word that the dam project is a go, but until then research and archaeological teams work as hard as they can to uncover the layers of history and catalog everything before it’s lost forever to a watery grave.

Sitting here on the banks of one of the great world rivers I always read about in school but never actually thought I’d see, I’m overcome by a great melancholy and anxiety about the future of this delightful little village. A true one-street town with a spattering of eateries, kitsch trinket shops and only a couple lodging options, it nonetheless has a certain charm and time-capsule-view-into-history that can’t be rivaled. Falling asleep to the gentle rushing of the Tigris, it’s hard to imagine that our very room may soon become host to fish and silt sediment and the nearby archaeological treasures only remembered through photos. Time will tell what the future holds for tiny Hasankeyf when the guillotine finally drops, but I’m glad we were able to visit now. From the local shopkeeper who would call out "Steven Segal!" when he saw Steve on the sidewalk (he had asked our names on the first day), to the inquisitive children who wanted nothing more than to practice their five words of English as we strolled by, Hasankeyf and its people will always hold a place in our hearts.