Türkiye, You Will be Missed

Steve: I am quite adventurous but I never would have thought that I would be skirting the borders of Disneylandesque locales such as Syria, Iraq, and Iran. But that is where we found ourselves for the next leg of our journey. In another era I might visit these countries but anyone who watches the news knows that today is probably not a good time for a jaunt into one of these places. Instead we stayed on the safe side and kept to Turkey’s unintended homage to automobiles—Van and Kars (Leah: can we all offer up a polite golf clap for my husband’s wittiness on that one?).

A relatively quick day trip found us leaving the arid Mesopotamian plains and entering a much greener landscape around Turkey’s Lake Van. Turquoise blue (yet polluted) waters dotted with islands and framed by snow-capped peaks set the scene for our arrival into the surprisingly bustling metropolis of Van. This city of 600,000+ people felt like our biggest foray off of the so-called “backpacker trail” since arriving in Turkey. English signage was next to non-existent and at best people could say or understand a word or two which made for some fun games of charades.

Indeed there were no hostels so for low budget accommodation we took Lonely Planet’s advice and stayed at the Cemil Otel in the center of town. While wonderfully cheap we still got what we paid for—spartan rooms and probably the skeeziest bathrooms we’ve yet to come across. The owner was redeemingly nice but I don’t think that would have been enough to stop our parents from shuddering in disgust at the funky squat toilets (Leah: Indeed, we didn’t shower for two days and had to fight back our gag reflexes the few times we caved and actually had to use the squat toilets) .

We approached our first full day in Van with enthusiasm and gusto as we looked forward to visiting the island of Akdamar and its synonymous ancient Armenian church. We began by attempting to find the dolmus (local minibuses) as noted in our slightly outdated (2007) guidebook. Of course things have moved around a bit and luckily there were locals eager to help us on our way. The only problem is that hand gestures—and even broken English—had a way of not getting us where we needed to go. After almost several hours of walking around we found the Akdamar dolmuses and continued on our way; to make a long story short these dolmuses didn’t actually take us to Akdamar and we had to repeat said expedition in a smaller town but eventually made it to the ferry landing.

The pain was worth the prize. Having pulled our hair out trying to get to one of the area’s largest tourist attractions, the views from Akdamar Island were especially stunning. Craggy rock cliffs and hundreds of sea birds competed for the skies with the Akdamar Kilisesi, an Armenian church built between 915 and 921 AD. After having seen a myriad of Byzantine, Roman, Greek and Ottoman churches and mosques, this architectural style really stood out to these two backpackers. Using local stone and volcanic rock the Armenian craftsmen built a church replete with beautiful interior frescoes and ornate reliefs adorning the outer walls. Outside of the church gravestones are strewn about and remnants of buildings take in the views that haven’t changed much since their glory days. At one point during our excursion a Turkish security guard ran up to us and started rambling authoritatively in Turkish. Luckily a bilingual tour guide was nearby and quickly had the guard apologizing; apparently there were two other Americans who had refused to pay the 3 TL (about $1.75 USD) entrance fee and he was dutifully on the hunt.

By the time we returned back to Van—which included an hour-plus wait in a dolmus since the driver didn’t have enough paying fares to make it worth the trip—we were done trying to navigate our way around Van. We unfortunately skipped the Rock of Van, which we could see from the main highway, but at this point we figured we would lay low, get some grub and secure our onward travel. Plus we had seen probably the most striking sight yet on our travels—multiple street signs for Iran which lay only a hundred or so kilometers to the east.

Figuratively kissing our nasty bathroom goodbye we enjoyed a giant Turkish breakfast before boarding the bus to our next destination, Kars. Upon boarding the bus we were greeted in English by two fellow travelers. Armen and his girlfriend Natalie were both Americans from California who had spent the past year living and travelling in their ethnic homeland of Armenia. Before long we began chatting about our travels and came to find out that we were both on Akdamar Island the previous day. And wouldn’t you know, it turned out that they had refused to pay the admission fee!?! Yup, this was the couple that we had been mistaken for. Apparently they scoffed at coughing up the fee due to personal gripes about having to pay for something that was previously on Armenian territory and built by their ancestors. Sure enough we would hear and learn over the next several days about the struggles of the Armenian people in relation to the establishment of the Turkish republic.

Heading north from Van the landscape only proceeded to become greener and more colorful. A seemingly distant memory was the barren desert of southern Turkey; now rocky hills were painted with yellow, purple and red wildflowers over a verdant canvass of green grasses. I was instilled with a peacefulness and sense of awe that was only broken by the friendly if not persistent Turkish gentlemen that kept trying to make conversation with us (read: ME) even though they didn’t speak a lick of English and we knew even less Turkish. The language gap was further exacerbated by the fact that sign language and pantomiming didn’t transcend the English-Turkish barrier. Gentlemen #1 would make the same two or three signals over and over again—say pointing at his eyes, then holding up five fingers and nodding—and proceed to stare at me for five minutes as if divine inspiration would suddenly hit me upside the head with understanding. Unfortunately shrugging my shoulders, shaking my head and saying “I have no idea what the hell you are saying sir” didn’t translate into Turkish either. Good times. At least you couldn’t fault them for trying to be friendly.

Leah: Natalie, Armen, Steve and I checked into the Hotel Temel 2 and even bargained down the less- than-enthused proprietor from the rate he quoted us. Again, nothing shmancy (what I wouldn’t give for a fitted bottom sheet in this country), but we had an ensuite shower and toilet that didn’t make us shudder and a wide balcony that proved the perfect place to dry some sink laundry. And yet again, we were perfectly positioned to hear the resonant mosque calls to prayers as each one seemed to compete in sonorous duels throughout the day. A quick sunset hike up to the Kars Kalesi, or fortress, took us past the Church of the Holy Apostles which was built by Armenians when they founded Kars. It was later turned into a mosque when Muslims came to rule, so the reliefs of the twelve apostles adorning the dome arches remain a bit incongruent when compared to the building’s current function (especially when you consider that Islamic beliefs prohibit the depictions of people or animals in art). The fortress afforded the typical incredible views and we spent quite a while walking around and watching the setting sun illuminate and bring to life the colorful buildings below us. On our way out we were accosted by a local younger guy who asked to take pictures with us. Steve went first with no problems, but then when my turn approached, our new “friend” kept sliding his hand tighter around my back so as to more comfortably cop a feel of my right breast. So shocked was I that I stood there dumbstruck as my darling husband snapped away unaware. Needless to say, we booked it after that. Dinner, showers (hallelujah!) and some Idiot Abroad viewing (thanks, Jess!) left us relaxed and ready for the following day’s explorations. 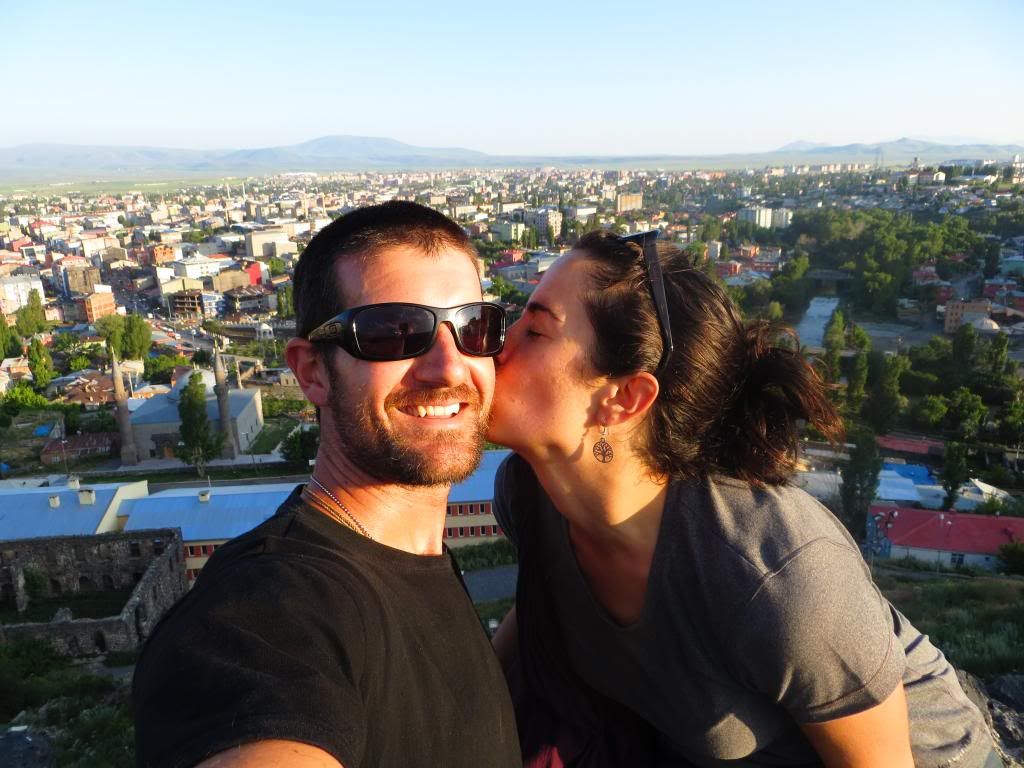 The four of us boarded a minibus with some other intrepid travelers (it was almost bizarre seeing tourists again after having been off the typical track for a bit) for the 45 km ride to Ani, once the capital of Bagratid Armenia and a stunning example of the master stonework craftsmanship of the Armenians. Coupled with a gentle undulating landscape exploding with wildflowers in shades of crimson, yellow, violet and white that extended down to the Ahuryan River, it was easy to see the former splendor in the crumbling ruins and imagine how this past settlement of 100,000 once rivaled the likes of Baghdad and Constantinople. Unfortunately, wars, raids, an earthquake and realigned trade routes all dealt mortal blows to Ani and after 1319 it was essentially abandoned until rediscovered in the late 19th century. The entire site actually rests against the highly sensitive Armenian border and several areas were entirely off limits. In fact, guard towers right across the river provided a somber reminder that the atrocities committed between Turks and Armenians in the early 20th century in regards to border delineations created wounds that still fester, as Armen and Natalie were only too willing to explain. All in all, a simply gorgeous day spent at an aesthetically resplendent site. After bidding farewell to our news friends (they were heading back to Armenia) we enjoyed a final Turkish dinner (we’ll be in a new country by the time you read this) while ruminating on a month’s worth of experiences, locales and friends.


Steve: Ah…Turkey…the land of facial hair, cigarette smoking, and body odor. Thanks to the efficacy (and 18% tax) of regional deodorants I fell into two out of three categories. I was a big, hairy, smelly man who more than once was mistaken for a Turk. Leah was none of these so I’m guessing people asking if she was Turkish was simply guilt by association. 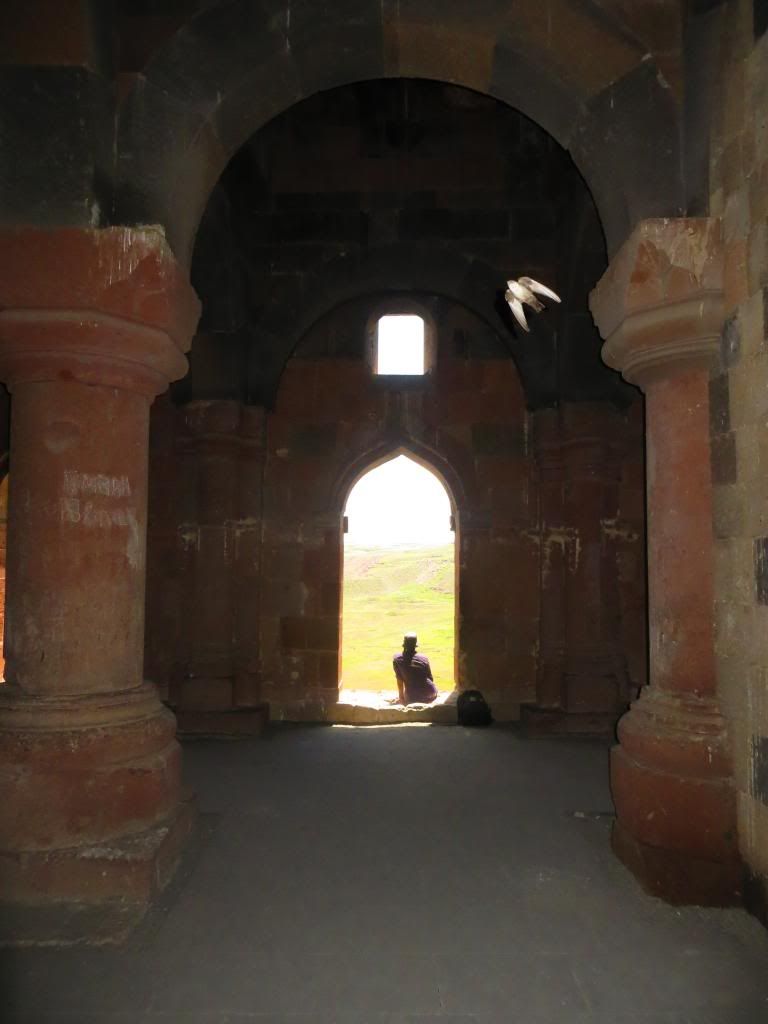 Leah: Turkey, you are quite the layer cake of ethnicities, cultures, history and natural wonders. From the cacophony of Istanbul to the verdant green plains of the east, you’ve treated us well. Sure, we won’t miss the omnipresent smell of cigarette smoke (especially in contained environments like overnight buses—seriously?!), but I’ll miss your love of ladybug décor (they’re known as “bugs of chance” and feature prominently on everything from magnets to swaddling blankets), giant white Kangal herding dogs the size of polar bears and the ubiquitous clusters of men sitting on mini stools at the tea shops sipping bitter tea sweetened with a cube or two of sugar. I’ll always remember your melt-in-our-mouths apricots and cherries, your chewy ice cream (but you can keep the goat milk versions) and the splash of lemon tonic we received for our hands after meals. Although I enjoyed you the first time around, I have a much deeper appreciation for all your layers having seen so much more this time. Thanks for letting me experience your Taksim Square riots and protests firsthand and bringing friends old and new into my orbit. I see a third visit in my future, but hopefully next time with even more expendable income to squander on your incredible carpets and maybe even an upgrade to hotels where the shower and toilet don’t share the same cubic foot of space. So Türkiye'de ederim (thank you, Turkey), we'll be seeing you again!


CLICK FOR A BUDGET SYNOPSIS OF TURKEY.
Labels: Turkey