Red Lights on the Water

Leah: It felt like being ripped from the womb to leave our Hetta microcosm and the maelstrom of life outside the Arctic Circle was not necessarily the euphoria we had been expecting after months of isolation. Before heading to Amsterdam we had a few transitional days back in Helsinki with Kalevi, our incredible pre-Hetta Couchsurfing host, and his delightful cast of flatmates. Despite my revulsion and depression upon being thrust once more into traffic, concrete and throngs of people in the latest city fashions instead of dirt-and-snow encrusted work clothes, Kalevi and clan dutifully indulged our requests for a homemade sushi night and a few (too many) beers. His flatmate, Jessica, even relinquished her room and cozy bed for the next two nights so we could sleep in comfort as late as we wanted. We talked dogs nonstop and everything reminded us of Hetta, from dog names that kept cropping up in advertisements, to restaurants named after Eliel, food in the shops we used to eat in the guidehouse and more. To me it felt like the mild version of experiencing a death; suddenly, everywhere you look there’s something to remind you of what’s been removed from your life. I also remained thoroughly surprised at how much city and suburb life repulsed me--I longed for the quiet, frigid air, open expanses of sky, small town life and last but not least, the dogs. Going hours without running my hands through thick fur or hearing a crescendo of dog barking just seemed wrong.

So it was with mild trepidation that I boarded our flight to Amsterdam, not sure what our brief sojourn in The Netherlands would hold. There were two calendar days left on our Schengen visa and we had decided pre-Finland to squeeze in Amsterdam before heading to Ireland. We also made the decision that we would be splurging on accommodation, food and everything else after our months in the frozen north; we had booked a private room ($71/night) at the Stay Okay Zeeburg Hostel, which came with a delish free buffet breakfast. Upon disembarking from the bus after our train ride from the airport we weren’t sure which way we were supposed to walk and ended up asking directions at a Surinamese restaurant on the corner. The food looked and smelled outrageous after a day of travel, so we kept “Carmen’s Corner Restaurant” in mind as we traipsed down the road to our hostel, which happened to be situated in a very ethnic part of the city.

Our room was ensuite, massive, spotlessly clean and sported a floor to ceiling window to round out our investment; we were in heaven. Because it was late and we were ready to eat our shoelaces, we headed back to the Surinamese restaurant, where we loaded up on delectable noodles, veggies, meats and sauces that reminded us of the impromptu backyard BBQ we attended with Naveen, our first official Couchsurfing friend, while visiting Aruba on our honeymoon. The older man serving the food, John, was the one who had originally directed us toward our hostel and he gravitated toward us to practice his rusty English, talk about traveling to the US when he worked for the airline KLM and generally make sure we were enjoying our meal after a day of travel. By the end he was pressing his business card into our hands (he owned a garage around the corner; his sister owned the restaurant but he helped serve on Sundays) and emphasizing that if we ever returned to Amsterdam we had a place in his apartment and he’d be delighted to show us the city. With full bellies and full hearts we more or less rolled ourselves back to the hostel and poured into bed.

The following day was the only full day we had in the city. Despite having a choice among a plethora of museums, cafes, historical sights and the ilk we set our sights on just one locale we had to visit in an effort to not drive ourselves mad trying to fit too much in with no time. So it was that we arrived at the Anne Frank House after a quick tram ride, the city shrouded in a seemingly appropriate foggy mist that rose from the omnipresent canals and swirled around the stone buildings and commuters on their bikes. We had heard the night before that you can buy tickets online and not have to wait in a queue, but those ones were all sold out when we went online and we chanced it by arriving around 8:15 for a 9 a.m. opening, scoring second place in line. Apparently in the height of tourist season you need to be waiting at 6 a.m. for a similar spot in line, so we lucked out for sure.

The museum itself resides in the old factory and office space where Anne’s father, Otto, ran his pectin business before going into hiding, as well as the secret annex where they lived for years. Visitors start on the ground floor and wend and wind their way up to the top floor (well, almost, as you can’t climb to the attic), taking in displays, videos, quotes from Anne’s diary and even passing through the actual fake bookcase door which hid the entrance to the annex. Each room also had a small framed picture recreation of what it would have looked like when Anne and her family were living there. While the spaces were essentially bare, the emptiness spoke volumes as a reminder of all the Jews and other maligned people who never returned; indeed, Otto Frank (the sole survivor from his family), said that was his intention when he opened the space to the public.

To tread those creaky floors, brush my fingers over the top of the kitchen sink, see the pictures Anne plastered over her room and not be able to look out through the windows due to blackout curtains was to understand only a fraction of what it must have been like to live in constant fear and semi-darkness for years on end. The most emotional parts of the experience for me were twofold. The first was a video interview with Otto where he talks as an older man about reading Anne’s dairies when they were initially given to him and realizing through her writing how terrified she was, yet how she never actually showed it in person. He made a comment toward the end of the video, his proud eyes full of sorrow, about his realization that no matter how much a parent loves their child and thinks they understand their inner workings, they never actually truly know them. That soul-bearing comment seared me to the core and stuck with me for whatever reason, at least until I came to the highlight of the exhibit for me: Anne’s actual red checkered diary (“Kitty”) in the center of the room, encircled by wall displays encapsulating her poems, short stories and recopied pages from her diary, since she intended to publish a book detailing her experience once the war was over.

Being a breath away from a young girl’s words that have been translated into numerous languages, inspired movies, plays and indeed stand as a representation of WWII and Holocaust atrocities was a spiritual experience for me. I remember reading the book as a very young Leah and struggling to understand the ramifications of hate and why someone’s religion would threaten others so much that they’d want to kill them, yet here I was now, decades older, having visited Auschwitz, explored former Jewish ghettos in Central Europe and seen countless horrific reminders of the Holocaust. Add to the fact that I’ve now also seen the brutality of the Armenian genocide, rampant anti-Muslim sentiment in a post-9/11 world and Khmer Rouge barbarism in Cambodia (just to name a few) and the grown-up Leah now sadly has a much better understanding of the roles fear, religion and hate play in the unfolding of world history. 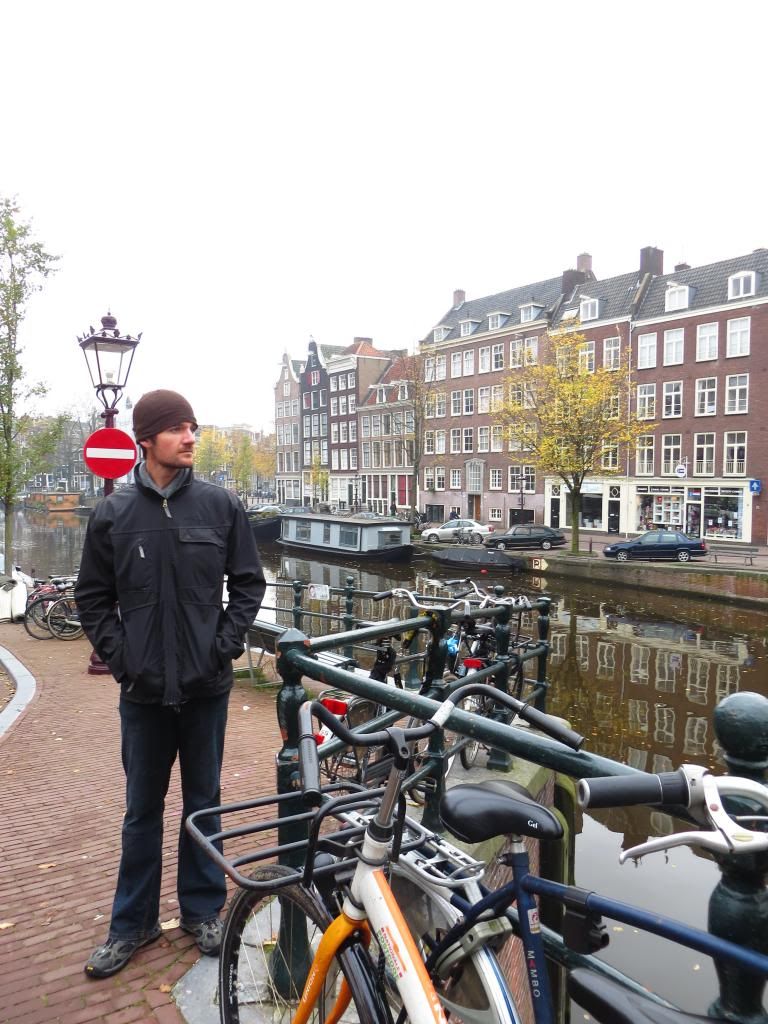 We rounded out the night with progressive dining (buying crepes, pizza, fries and other items from different vendors as we strolled along) and then walked the red-light district just to say we did it. It really is exactly how it’s portrayed and imagined, with alley after alley of small, windowed rooms illuminated with eerie red light and fringed with heavy drapes highlighting all sizes, shapes and colors of women in naught but scandalous underwear. Many were on their cell phones, some teased and gestured to passerbys and one was even sitting bored on her stool, picking at her feet. The other people walking the streets surprised me-- not just bachelor and bachelorette party groups, but elderly couples, families, and everyone in between. Sure, sex is for sale, but there are also a host of eateries, boutiques and souvenir shops scattered amidst Amsterdam’s sultrier side. And truth be told, I think most people are a little curious about this literal window into a profession that is often marginalized and shunned and not as readily accessible in our home countries, which is of course one of the biggest draws.

Me being me, all I wanted to do was sit down in a café over a beverage where I could ask the women if they’re here of their own free will (Amsterdam is an ending point for many human/sex-trafficking rings), how much they earn, if they’re happy, if they have children, how their health and safety is looked after, what the HIV & STD rates are like, etc. I didn’t find myself judging the women; indeed, I was more curious than anything and just wanted to talk frankly with them, which of course wouldn’t be a possibility. Instead, I just felt like a dirty voyeur as I tried to escape down the wet cobblestones past the reddened rooms, live sex show adverts and adult novelty shops, with Amsterdam’s sex workers shaking their bits at me in salute. Been there, done that, don’t need to see it again.

All in all, Amsterdam was lovely for what it was--our first stop after Finland. I would have enjoyed seeing more of The Netherlands, since I know that being in a bustling city was not the antidote for my body and brain trying to acclimate to post Hetta Huskies life. However, I did enjoy our truncated visit to Amsterdam, but when I say that besides the Anne Frank House my favorite part was visiting the library, I think that may clue you into my longing for quiet and a place to process my Finnish journey.