Steve: At this point in our travels we can safely say that Yerevan is the smallest capital that we have yet to come across. I am not sure how it compares to other large cities on a square mile basis, but at least in feel it is much, much smaller. There are no towering skyscrapers looming over the downtown area, blocking views in or out. Getting from one end of downtown to another is easily done—if not enjoyable—on foot. As Leah has pointed out in past blog entries, one of her biggest pet peeves is countries where pedestrians not only do not have the right of way but are targeted like a sadistic game of real-life Frogger; if you even seemingly think to set foot across the street in Yerevan cars slow down and stop for you—this is definitely a walker’s city.

Somebody had mentioned to us at one point that Yerevan was rather treeless since during the Soviet occupation Armenians had to cut down street trees simply to burn for warmth. While some streets may be missing the welcome shade of leafy green arbors, the city architects of days past seem to have compensated with plenty of parks that are undoubtedly enjoyed by residents and tourists alike. Indeed Leah and I spent much time in these parks taking respite from all the walking done on warm summer days. We even spent an evening picnicking with a bottle of a wine at the aptly mentioned Lover’s Park. Of course with no open container laws—which we have yet to see abused anywhere on our trip—like we have back in the States this was perfectly legal.

Venturing outside of Yerevan the sights quickly deteriorate to rundown Soviet era projects and abandoned factories. Just because Yerevan is clean, hip and bustling does not hide the fact that this is a poor country still climbing its way out of a relatively recent history of war (with Azerbaijan from 1991-1994), foreign (Soviet) occupation, natural disasters (a 1988 earthquake), and the identity-altering cultural and geographic schism of the Armenian Genocide (1914-1918). All these events not withstanding people do not seem to be miserably poor with homeless people huddled underneath freeway overpasses like we might see in the States. I can only surmise that this may be a holdover from Armenia’s days as a Soviet state—socialist ideals at least dictate that the poorest still get a helping hand from their brethren. We have yet to see Armenians on buses or trains not sharing food with others.

This leads me to the last and most important point of this ramble—based on our short stay here Armenia might rank as one of the friendliest countries on our trip. Even though security guards won’t let you sit much less step foot on grass in public parks and even though curmudgeonly old ladies on the metro will beat you at any stare down contest, the pervasive feeling is that people are glad that we are here. Sure, they want and need the tourist dollar—of course you don’t have to be a developing country to want to capitalize on visitors—but Armenians seem to be genuinely proud of their country and heritage and are truly grateful that you are here to experience it. Ingrained in their genetic makeup is the DNA for sharing and giving and I would be willing to bet that any visitor here would come across it—I know that we did.

On our remaining days here we made it a point to see all that we could while maintaining our sanity (Leah: Given Yerevan’s central location and cheap accommodation we had decided to stay in town and just take day trips the whole time, which many travelers end up doing). One day was spent visiting the nearby town of Gyumri which with about 150,000 inhabitants is Armenia’s second largest city. Originally founded in the 4th century and known as Alexandropol, parts of the city still lay in ruins from the devastating 6.8 Spitak earthquake that occurred back in 1988—most notably the Church of the Holy Savior which is slowly being rebuilt but still has a ways to go before it is finished. Given the wars and political upheavals that have happened since then helps contextualize why repairs haven’t been completed. The city itself was easily walkable and there wasn’t a whole lot to do but that was kind of nice in itself. The morning train ride from Yerevan—complete with boxes upon boxes of fruit cargo—was worth it just for the pleasant views of the Armenian countryside. 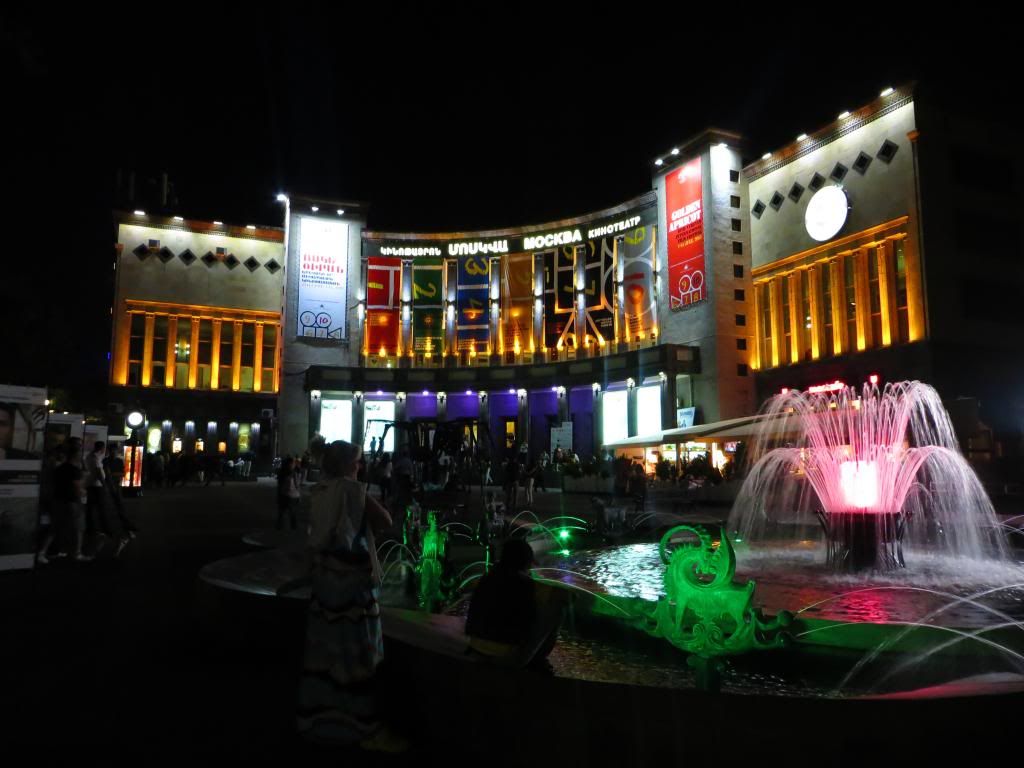 Back in Yerevan we spent a good part of one of our days visiting the iconic Cascade monument that joins the lower downtown area of Yerevan with the higher northern section. Originally conceived in the early part of the 20th century this edifice didn’t begin construction until the 1980’s but was abandoned after the 1988 earthquake and was forgotten about after the break-up Soviet Union in 1991.  Construction did not resume until 2002 when the City of Yerevan, with generous help from the obscenely rich Armenian-American Gerald L. Cafesjian, acquired the necessary funding for a project of this magnitude.

How to describe it The Cascade—it is essentially a massive staircase meticulously constructed of stone, replete with water features, carvings, creative landscapes and loads of art. Inside this staircase of sorts are terraced exhibition rooms with everything from big name modern art, pop art, nationalistic murals and even a Swavorsky crystal art exhibition. And the most staggering part of this is that a large portion of this artwork is from the personal collection of the aforementioned Mr. Cafesjian—which is also why the Cascades’ other official name is the Cafesjian Center for the Arts.

From a construction standpoint this is one of the most innovative and aesthetically pleasing structures I have seen anywhere—I would think that architects and major cities around the world would be studying, imitating and trying to outdo Yerevan’s amazing museum-meets-park-space-meets-national-icon. Throw in the fact that it houses world-class art and it is not be missed (Leah: Amen to all that. This may be my favorite museum of the trip so far.)

The second to last day of our stay found us sucking it up and taking a guided tour to the nearby sights of Garni and Geghard (Leah: Yes, it was a bit of a splurge, but totally worth it to have a guide give all sorts of info and answer all our questions, something that we don’t have the pleasure of when we do sites on our own with only a guide book in hand). The former is the site of a reconstructed pagan temple that was originally built in the first century in honor of the sun god Mithra. The site also included the remains of an ancient church, a royal home, fortress walls and a Roman bathhouse. The later still has a relatively intact mosaic which has Greek lettering noting that the artists received nothing for their work. Since it is in what was the royal dressing room it is debated whether the artists were actually not paid for their toils or if there is some other meaning behind it.

Moving on from Garni we visited the nearby monastery of Geghard which was named after the lance that pierced Jesus’ side at the hands of the Roman guard Longinus. According to legend he converted to Christianity after regaining his sight when splashed by the blood and water pouring out of Christ’s side. There are apparently several other lances that are purported to be the very same (in Rome, Vienna and Krakow) however this lance is currently stored in Echmiadzin which is the Armenian Apostolic Church’s version of the Vatican. The monastery and adjacent chapels, cave dwellings and omnipresent kochkars were well-preserved and some of the best we’ve seen on this trip. Indeed before we knew it we found ourselves running to the tour bus since we lost track of time amidst the atmospheric and hallowed depths of the church.

No blog entry would be complete without a mention of the foodstuffs that we stuffed our faces with. Although I am going to miss the hearty fares of Georgia—khinkali, ostri, lobiani, and khachapuri to name a few—Armenia wins for being the creators of the lamachun (pronounced “la-ma-joon”). Although Turkey has a version by the same name, Armenia has perfected what I like to call the culinary crack cocaine of the Caucuses (this alliterative catchphrase is currently copyright pending). This pizza-ish creation is on a crispy thin crust and topped with cheese, meat and parsley; not too much as we would probably do in the States but instead with just the right proportions. Squeeze on some fresh lemon juice, roll up half of your lamachun and you’re good to go. I cannot adequately describe the taste of this wonder and won’t even attempt to try. All I can say is that it is a must-try if you ever have the opportunity and if I can find a recipe that does it justice I will make one for you back home in the States.

Leah: And we’d also be remiss if we didn’t mention our new friend, Chant. We met him when the three of us found ourselves in a four person dorm for a week and quickly started sharing travel advice and conversations each day. Chant recently graduated with his nursing degree from the American University of Beirut and was in Yerevan to check out some of the sights, as his ancestry is Armenian. He graciously answered all our questions about Lebanon and his travels and went out of his way to give us advice and help us around Yerevan. He’d even managed to score a Fulbright Scholarship to the US, only to have it rescinded when funding problems arose- he’s in the process of securing one for next year instead. The three of us even found ourselves sharing a bottle of pomegranate wine on two different evening as we chatted about life, love, travel and vocations. It wouldn’t have been the same without him and since we sincerely believe that the people on this trip cross our paths for a reason we firmly hope to see Chant again, whether in Lebanon or our neck of the woods in the US. And on an unrelated note, this little gem of an animated music video was played on the marshrutka back from Gyumri and we have to share it. According to Chant, the singer, Tata, always has long hair and a baseball hat and this image combined with a music video about Tata/Armenians being inserted into American/Hollywood history (complete with a hybrid Armenian/American flag) pretty much had us in stitches. Sorry we can't find translated lyrics but you definitely get the gist of it just by watching.

Steve: As I sit in the Tbilisi International Airport putting the final touches on this blog entry I am amazed at how fast the past three weeks have come and gone. We will be moving on to Bulgaria before moving north through Eastern Europe and I am excited for some of the places that we have on our itinerary—but I should probably be just as excited for those that we haven’t yet to consider. Georgia and Armenia weren’t on our radar as of a couple months ago and they have both turned out to be hidden gems that we will be talking about for years to come. Sleepy and travel-weary I can only dream about what unexpected treasures await us….